I Could Pee on This

Don’t shout at me: it’s the title of a book! More specifically, I Could Pee on This and Other Poems by Cats, by Franceso Marciuliano. Make a note: you may want to give copies to cat-loving friends as gifts! 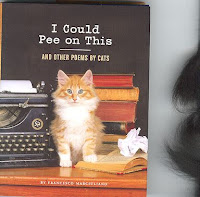 While it’s not great literature, this little book is full of charm, from Marciuliano’s humor to some great cat photos to the poems themselves. Of the poems the author says in his introduction, “…by the time you ‘ve finished reading this poetry anthology, you’ll not only completely understand everything your cat thinks and does but even applaud him for it. Maybe give him a medal. Or throw him a parade in your hallway, making sure to avoid staircases so all the tiny floats don’t tumble down. Or you can just sit your cat down, look him straight in the eyes and say, “I get it. I really do get it…..furry face.”


You see, it’s all about catitude. The title poem says it all:


Notice that the cat only contemplates the threat, but that the threat is preeminent cat philosophy.


Our cat, Fiona, approves this message. You can see her fur alongside the book photo, where she insisted on pressing herself against the scanner to watch the light move (next best thing to watching the printer, which is second only to watching the DVD changer slide in and out on the TV – her favorite pastime).


I mention all this because I recently bought a new computer. (Well, had one built from the ground up – about the same price as a good off-the-shelf, but with far better components.) I also finally overcame my inertia and installed Windows 7, warned that it would take time to get used to. (!!) The installation of other programs and peripherals required obtaining new drivers, and in some cases new versions of programs that I have used for years. I had to remove and reload several applications. I was “not recognized” by many secure sites that I use and had to prove my identity. I could pee on all that.


Well then, of course not only Windows 7 was different but everything that came with it is different. In the long run I like it a lot, but it was work figuring things out and looking up help files. I could pee on that, too.


And then, new programs had moved old tools to different places and changed  their names. Or changed what they did and assigned old functions to something else.  I could pee on that for a long, long time.


There were, in fact, curses aplenty. Tears. Wails, growls, moans and naps to recover. I could pee a whole bunch of times.


It’s all about attitude, or cattiude. Don’t mess with me. I drink a lot of coffee.

Posted by EphemeraLee at 5:59 PM

So I'll be buying at least 5 copies of that book for holiday gifts. And I hope some of your troubles are resolving!

That's catitude all right! My mom's cat had it in spades. Sounds like a fun book.

EphemeraLee
Eugene, Oregon, United States
I have been a freelance journalist and photographer, a goat and chicken farmer, an organic gardener, dealer in antiques and jewelry, a poet, an artist, and currently I sell used books and ephemera on the Internet. I am a proud member of an international cooperative of used book dealers with a website called Tomfolio.com

THE PRINTS and THE PAPER: Fine books and ephemera, photos, maps, and other deliciously odd items.